This call to action by WithCatalonia is also available in German 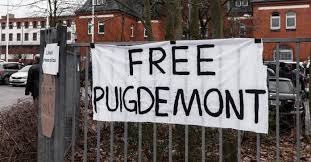 The Spanish state’s repression against Catalonia’s democratic rights gets worse every day. There are at this moment 10 leading politicians and activists in prison, without having been condemned of any crime. They are accused of violent rebellion, although they have never used violence. By mid April the two leaders of the main Catalanist organisations, Jordi Cuixart and Jordi Sánchez, will have spent 6 months in prison.
And apart from the 10 political prisoners and 6 political leaders in exile, from 1 October until now there have been: 1,500 people injured while voting or demonstrating; 150 fascist attacks; 140 web sites closed; police attacks on journalists; censorship of rappers, writers and artists…
In protest at this situation, there will be a united demonstration in Barcelona on Sunday 15 April at 11 am, organised by a very broad platform of social movements, including the ANC, Òmnium Cutural, trade unions, the neighbours’ organisations, youth movements, cultural and sporting organisations, the federation of NGOs… It will be a massive call for solidarity with the political prisoners, and with all those suffering the current attacks in Catalonia and increasingly in other parts of the Spanish state.
We call on international solidarity movements to organise actions over the weekend of 14 and 15 April: demonstrations, rallies, public meetings, symbolic events…
If we allow repression to go unchallenged in Catalonia today, then fundamental rights can be repressed tomorrow in any part of the world.
Please mobilise on 14-15 April. Defend democracy and human rights.  In Catalonia and everywhere.