Breaking out of the Bride Factory

Five young girls rebel against their oppression in a traditional Turkish village. With much sympathy for her heroines, the director of the film ‘Mustang’ manages to avoid clichés, says Phil Butland 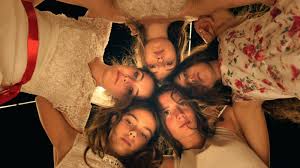 ‘Mustang’ takes place in contemporary Turkey – although we are a long way from the metropolis of Istanbul. Lale (Güneş Şensoy) and her four sisters live with their grandmother and uncle in a seaside village. At first, says an older Lale in a voiceover, everything was fine. But not for long.

After playing on the beach with local boys, the five sisters are punished. Their wantonness has shamed the family. They are no longer allowed to go to school and their home becomes a fortress. The windows are barred and increasingly high walls are built around the house. The sisters’ mobile phones and computers are confiscated.

As the girls reach puberty, the family starts wedding preparations. Women from the village teach them how to cook, clean and sew. On the few occasions when they are allowed to leave the house, they must wear puritan clothing, which is, as Lale remarks “the colour of shit”. The house becomes a Bride Factory.

At first, there is a small amount of room to manoeuvre. The eldest sister, Sonay, does not have an arranged marriage – she is allowed to marry her boyfriend. The man who was due to marry her marries her sister Sonay instead. Staying single is, of course, out of the question.

Even worse than staying single is sex before marriage. One of the sisters is sent to the doctor’s to undergo a virginity test. The parents-in-law of another wait outside her bedroom on her wedding night, so that they can check her bedclothes for blood.

The role of the women in the village – the girls’ grandmother and aunts – is contradictory. On the one hand, they are the girls’ jailers. On the other, they were also young girls, and try to prevent the worst from happening. Yet they have little power to prevent sexual abuse in the family and its tragic consequences.

On one occasions, the sisters break out of the house, and go to watch a football match. Unfortunately, the game is being televised and the girls can be clearly identified. It would be a scandal if the men of the village were to see them. So, the women conspire to sabotage the village’s electricity supply.

The everyday life of the girls is increasingly strictly controlled, and they are married off at an increasingly young age. Lale and her sister Nur rebel. They see no alternative to fleeing to Istanbul, where Lale’s ex-teacher is living (inconceivably!) unmarried with her boyfriend.

The film ends with Lale’s and Nur’s arrival in the capital city. The girls have escaped the parochial village. However, it remains unclear whether they have arrived in paradise. This uncertainty is important for the discussion that the film has provoked.

One (male) producer of the French-financed film lauded it for “celebrating French values such as liberty”. Other critics of the film in Turkey have denounced it for being orientalist.

Both sides see the film as depicting a conflict between the supposedly progressive secular West and the apparently reactionary religious Orient. This interpretation fits the narrative that we have regularly heard, at least since the attacks on “Charlie Hebdo” in Paris, and more recently after the sexual attacks on women in Cologne.

But the film cannot be reduced to this simple dichotomy. In the village many people are certainly religious, but their religious belief rarely determines their lives. Women sometimes forget to wear their headscarves properly. There is significant sexism, but the roots of this sexism seem to lie more in the society and family than in religion. And some villagers are progressive – like the long haired delivery boy Yasin (Burak Yigit) who more than once comes to Lale’s rescue.

Director Deniz Gamze Ergüven supported the Gezi Park movement and has criticized the Turkish government of Recep Tayyip Erdogan. She has said that when she was creating the male characters in her film, she had Erdogan “very clearly in mind”. Yet the Turkish-French film maker is equally critical of the West.

“Through my travels I have developed a different perspective on Turkey, and can express it better. But it also works the other way round, for example in the debate around the refugee crisis: because I know how it is for Turkey to accept over two million refugees, I see it somewhat differently to most Europeans, when I hear how their governments talk about maybe accepting a couple of hundred refugees.” These are not the words of an orientalist.

But she has also seen that Turkey is radically changing. In one interview she said “Turkey is in the middle of a transition, everything is changing (…) you have the feeling that every moment something can happen – and it is completely unclear in which direction.” This is why it is important that the film does not just show oppression and flight, but also resistance.

Today’s Turkey does not just belong to Erdogan, but also to the activists of the HDP – the Kurds, Armenians and Turks who are fighting for the rights of national minorities, women and LGBT people. It also belongs to the courageous women who wrote, directed and acted in ‘Mustang’. It is not unimportant that they are women, as Ergüyen acknowledges: “most films are directed through the camera lenses of men. This means that cinema mainly presents us with an unbalanced vision of the world – where women are normally depicted as foreign bodies and are regularly made into objects.”

This year we saw once more that the Oscars are largely the domain of rich white men (for the second year running, no black artists were nominated for the main awards). This makes it all the more important that ‘Mustang’ had been nominated – a film by and about women from the Global South. Even though Hollywood doesn’t take the prize for the Best Foreign Language Film particularly seriously, the nomination is useful for the film to deservedly reach a wider audience.

The last word belongs to the director: “I am particularly happy to show female figures, who are unusual, funny, resourceful and clever. Normally cinema doesn’t associate characteristics like courage, intelligence and resilience with women. It is annoying that even now women are still portrayed as bimbos. That’s why I believe that the film fills a gap.

The German version of this review can be found at http://marx21.de/mustang-ausbruch-aus-der-brautfabrik/