“Café Belgica” combines all the ingredients of a wild celebration. Sympathetic people, a fast pace and superb music. But when the lights come back on, you feel a bit uneasy, says our reviewer Phil Butland 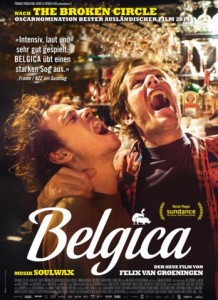 Frank (Tom Vermeir) is likeable, charismatic and completely irresponsible. His reaction to the imminent birth of his second child is one of utter panic. He immediately looks for something “more rock and roll”: something that will take him as far away as possible from his home and family. Luckily for him – and unluckily for his long-suffering wife Isabelle (Charlotte Vandermeersch) – his brother Jo (Stef Aerts) owns the dive bar Café Belgica. And Jo needs help.

With the help of Frank’s musician friends and under the influence of not a little cocaine, the old Café Belgica with its dilapidated toilets and depressing atmosphere is replaced by a  vibrant venue – a Noah’s Ark for society’s underdogs. Staff meetings for the multicultural workforce are anarchic and democratic, and the pub has a festive mood with an exceptional music programme.

The music is the strongest element in the film. For this, director Felix Van Groeningen must thank the duo Soulwax – like him, born and bred in the Flemish city of Ghent. The film shows 15 groups playing 15 different style of music – all fictional, all created by Soulwax, and all brilliant. Because of the music, you really believe that Frank and Jo don’t just run any old bar, but somewhere that is really worth the work and effort

Thanks to the great soundtrack and the film’s pace, you hardly notice its weaknesses while you’re watching – especially in the breathtaking first hour. But when you start to think of it, you start to notice how thin the plot is – nothing that we haven’t seen in a thousand other films – such as Thomas Vinterberg’s recent film The Commune. Some well-meaning people want to live fairly, then realise how difficult it is to live together and their community breaks apart.

Yet there is a big difference between Vinterbergs commune and Van Groeningen’s café. In the café we see at least the potential of throwing off the burdens of everyday life – and its downfall is a very real loss.

This unsuccessful attempt to realise our dreams is connected to the society in which we live. In interviews Van Groeningen has said that the café stands symbolically for the Belgian state: “for me, this story tells us something about social change in the last twenty years. Everything has become more austere. Maybe some ideas were lost. The bar is a social microcosm.”

With this in mind, the film does touch on some social issues. Let’s take Mohammed, who organises bouncers. Initially, the brothers want to organise their own security for their egalitarian café and sign a contract with Mohammed only reluctantly. Mohammed obviously has a “migrant background”, yet it is clear that he sees the job of an “effective” bouncer as ensuring that foreigners, and particularly Moroccans, are kept out. It would have been interesting to see how the humane brothers deal with such problems, but the film only deals with such subjects very superficially.

Gender issues are treated similarly. There are interesting subplots – about abortion or infidelity, but these are opened and then left hanging. Frank’s behaviour towards Isabelle is indefensible, and Jo acts as his brother’s pale shadow. When Jo’s girlfriend Marieke (Hélène de Vos) needs his support, he is unable to empathize. We are left to work out for ourselves what Isabelle and Marieke might think.

This lack of interest in the female characters is particularly disappointing from Van Groeningen, whose previous film, the Oscar nominated “The Broken Circle” (known in some countries as “The Broken Circle Breakdown”) was centred on a strong woman. In “Café Belgica” we only see the world through the eyes of the two brothers, who spend little time considering such issues.

“Café Belgica” is like one of the drug rushes that the film – maybe too often – depicts: It is an emotional roller coaster, yet in the end you have the feeling that something is missing. Too many stories are not brought to their end, too many characters spend too much time in the background. Instead of the many scenes of excess, a little nuance could have been useful.

Despite this, “Café Belgica looks good and sounds terrific. Musically and visual it competes with the very best films. Yet after the high comes the disappointing comedown. But what a high, as long as it lasts.