Skip to content
HomeUpcoming Events26 August – #unteilbar and the fight against racism What is the role of Die LINKE?

with Corinna Genschel (responsible for Die LINKE and social movements) 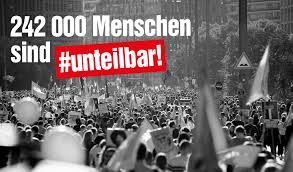 On Saturday, 24 August, the #unteilbar alliance is organising a demo in Dresden. Last October, #unteilbar mobilised 250,000 people for refugee rights. We hope that this demo has a similar impact.

There will be local elections in three East German states this year, starting with Brandenburg and Saxony on 1 September. It is feared that the Alternative für Deutschland (AfD) will do well in these elections, and may even become part of a ruling coalition.

All this is happening while the fascist elements of the AfD are taking over their leadership. Chemnitz, in Saxony, has seen significant recent Nazi violence and mobilisations. The lead AfD candidate in Saxony, Jörg Urban belongs to the fascist wing of the party and has pledged to massively increase the building of detention centres for asylum seekers.

It is therefore crucial that as many anti-Nazis as possible demonstrate in Dresden, regardless of other political opinions. But is this enough? We will march alongside SPD and Green members, but can’t forget the racism of Berlin’s former finance minister Thilo Sarrazin (SPD) or the Green mayor of Tübingen Boris Palmer. And the policies of the earlier Red-Green government, like war on Yugoslavia or the Hartz IV attack on the unemployed, helped contribute towards the rise of the AfD.

How can we separate the AfD’s Neonazis from people who vote AfD out of desperation and the feeling that there is no credible alternative? How can we maintain die LINKE’s profile as an anti-capitalist party, which can offer hope to the victims of neoliberalism and not more of the same old politics? What is the role of socialists within the broader fight against racism and other forms of oppression?

On 26 August, 2 days after the demo, die LINKE Berlin Internationals will be speaking with Corinna Genschel, who represents die LINKE in the organisation of #unteilbar. This follows a discussion led by Corinna at our Summer Camp, which raised many important questions about how socialists should organise inside broad anti-racist initiatives like #unteilbar. Everyone (except Nazis) is invited to participate in the discussion.